Driving in the dawn of democracy

On 2 February 1990, then President FW De Klerk delivered a famous speech that would forever change South Africa, its people and the economy. The unbanning of the African National Congress and other political parties, together with world events such as the collapse of communism and an increasingly globalised world economy, would have a major effect on South Africa, and on the taxi industry.

This moment led to South Africa’s first-ever democratic elections in 1994, where, on 27 April, election day, taxis played a major role transporting people free of charge to the 9 000 polling stations.

“1994 was strange, really. I remember I had a lot of mixed feelings and emotions. I realised that something that has never happened in South Africa – especially to us blacks – was about to happen. So, after so many years of apartheid, of being oppressed and the likes, everyone was excited. There was hope that things would be different in South Africa. It was like this is the day we’ve been waiting for,” says Edgar Tsentse, who at the time drove his father Morriat Tsentse’s vehicle in Orkney in North West province.

Operating out of Kathrada Park, at the time an informal settlement in Newclare, Johannesburg, Elias Mbete was one of many taxi owners whose vehicles were rented by political parties to transport voters to and from voting stations.

“My driver was busy driving people to polling stations. It was a good time to operate,” he says.

Taxis were busy for days on end as they transported people during the election campaigns and on the day.

“There was that kind of feeling of freedom that we’ve never had before,” says Edgar.

People from all backgrounds met each other in queues at the polling stations, sharing in the optimism over the historic new direction in which the country was headed.

“It was almost as if there was that instant friendship. We knew each other – people that you’ve never met became friends in those queues. We didn’t even think that the queues were too long, we only wanted to get there and vote,” says Edgar. 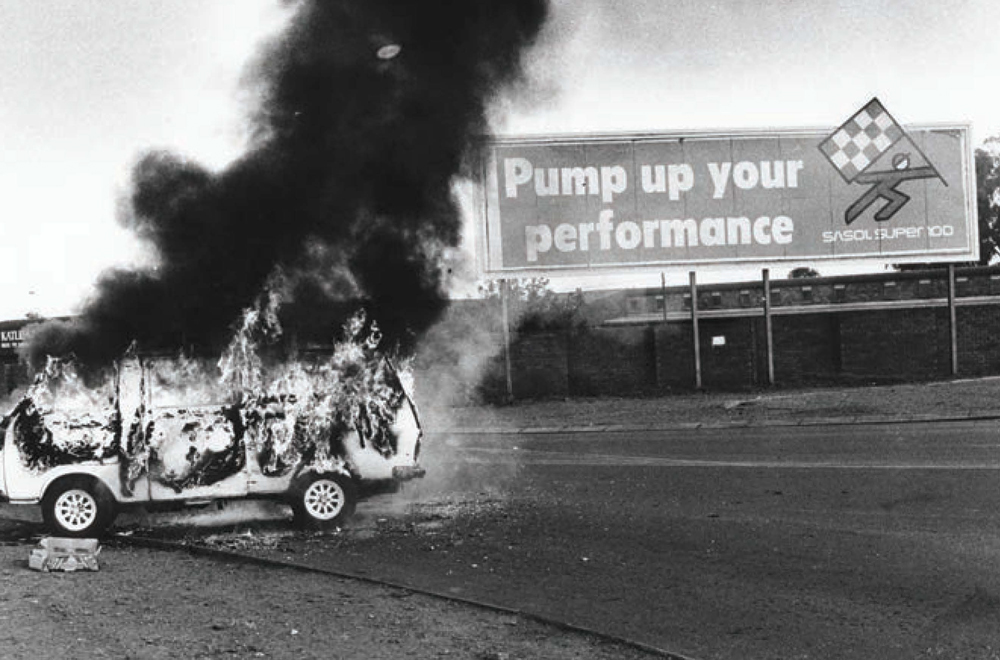 Beneath the surface of hope, the country was still highly volatile, with political factions fighting for their future, while in the taxi industry, taxi bodies, owners and operators were entering a brutal war that still, unfortunately, continues to this day.

By 1990, the industry was already showing signs of over-saturation which in some areas sparked intense (and often violent) battles between owners’ associations.

In 1993, the South African taxi industry made international headlines – for all the wrong reasons. A New York Times article, “Deadly Free Market: South Africa’s Warrior Taxis”, tells the story of bloody turf wars, merciless killings and assassinations associated with South Africa’s largest form of public transport. While the wars raged between rival taxi associations and the operators, fear spread among passengers who, with no alternative transport options, were forced to travel in minibus taxis, risking their lives with each trip they took.

“Before you get in a taxi now, you look around at the people inside, and you listen to what languages they speak,” a Katlehong passenger, Seipati Letsatsi, told the newspaper. The Johannesburg township of Katlehong, at the time, was a powder keg of violence – with both political and taxi-related violence terrorising the area. Having no other way to get around, Seipati was forced to spend four hours each day commuting by taxi to and from a teacher training course.

Elias, now a 75 year old taxi owner, was at the time driving a vehicle owned by a police sergeant, Frans, who was stationed at the then John Vorster Police headquarters in Newtown, Johannesburg. Elias was in the thick of the violence and was shot twice. First, in Diepsloot, just north of Johannesburg in 1994, then again in Honeydew, Johannesburg, in 2008.

“You just feel you lose power, and fall to the ground,” he says of being shot.

On both occasions, Elias and other drivers were protesting against having their routes “hijacked” by rival taxi gangs. The first bullet in Diepsloot just missed his heart. The second went through his stomach. He was lucky that day. Two of his best friends were killed. 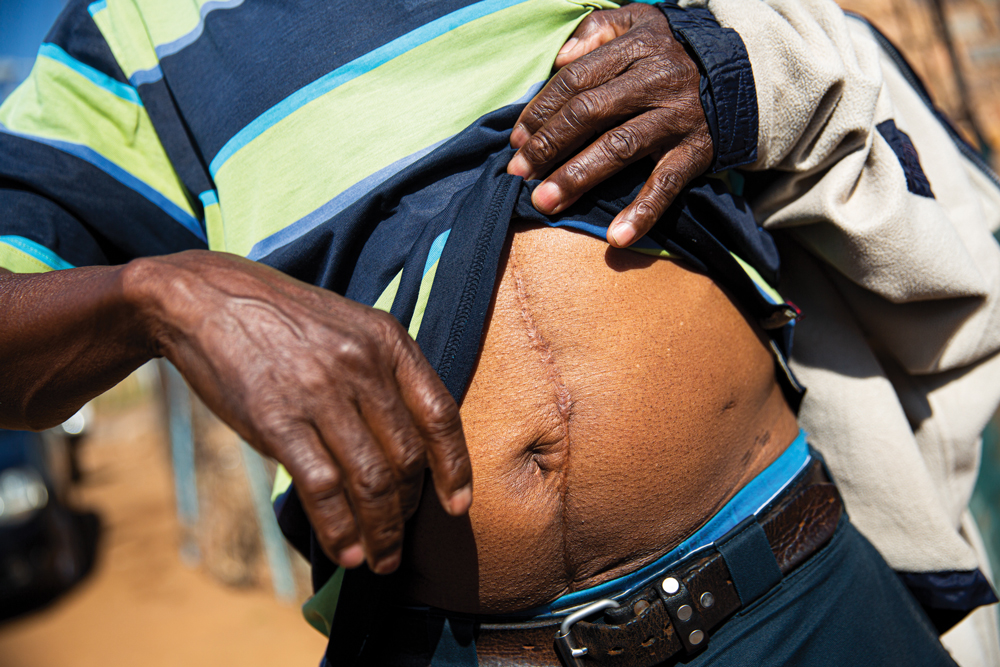 Fearful of riding after dark or before sunrise, passengers working mainly in white residential areas showed up late for work or left early to get off the roads by dusk, often without any understanding from their white employers. At times of upheaval, many missed work.

While the violence raged on, many feared losing their jobs. Stranded without a ride for a day as his taxi refused to run a gauntlet of barricades, Andries Mokhati, who worked at a shipping company at the time, had deeper worries than the dangers of getting onto a taxi. When asked by the New York Times at the time if he wasn’t afraid of the taxis, he nodded, but said, “I’m more afraid of no taxis”.

Staying afloat in a crowded market

The possibility of job losses was real. After riding the wave of a high gold price during the 1980s, anti-apartheid sanctions were hurting the country’s economy. And while the new ANC government was working hard to rebuild the economy, the gold price dropped dramatically in the late 1990s, wreaking havoc on the industry on which the bulk of the country’s economy was built.

“Before 1994, business was great,” says Edgar. “We worked all around Orkney when the town had eleven mines, all operating to capacity.”

The mines were the heartbeat of Orkney in the early 1990s, while the taxis moving people around were the pulse of Orkney’s society and economy. For the Tsentses, business couldn’t have been better. In 1994, Morriat bought a Volkswagen Kombi, and six months later he was in a position to buy a second vehicle – this time a Nissan E20.

But as time went on, the fortunes of Orkney’s economy waned. By 1997, some of the mines came under new management, and as the gold price dropped, the decline was more apparent. Soon the mines started to retrench workers and, between 2000 and 2002, the mines shut down for good. The town that had never known unemployment entered an economic slump.

Many of the people who lost their jobs at the mines used their severance packages to buy minibus taxis and attempted to make a living from the industry.

“Suddenly there were more Kombis than the people we could carry,” says Edgar. While most of the newly procured taxis were ultimately repossessed, the Tsentses managed to keep their business afloat, running their taxi business even when profits were scarce.

The passengers make it worth it

Far from the congestion and violence of big business centres, Magai Hendrik Williams was a prospective businessman who ventured into the taxi industry in 1990. Buying his first taxi with cash saved up during his years working in the transport industry, Hendrik started his business in the Northern Cape town of Philippolis, driving people to and from areas such as Colesberg – 60km away – and Bloemfontein.

“I drove from Philippolis to Colesberg, to Springfontein to Trompsburg, then on to Bloemfontein, Jagersfontein, Koffiefontein and Fauresmith, before returning home to Philippolis, every day,” says Hendrik, who is now 70 years old.

His 600km plus route kept him on the road for more than seven hours a day. But he loved every minute of it. “I love speaking to the people and interacting with them. The passengers make it worth it,” he says. Similar to other operators, Hendrik fell victim to the country’s struggling economy in the late 1990s. Due to licensing restrictions, his 700km route was cut to just over 60km, driving between Philippolis and Colesberg. In town, most people would choose to walk, instead of spending hard-earned cash on a taxi trip.

But Williams was hooked. After returning to the transport industry for three years, he came back “home”, buying another taxi, which he still drives every day.

“It’s a great business to be in. I still enjoy driving. If the Lord saves me, I will continue driving for long.”